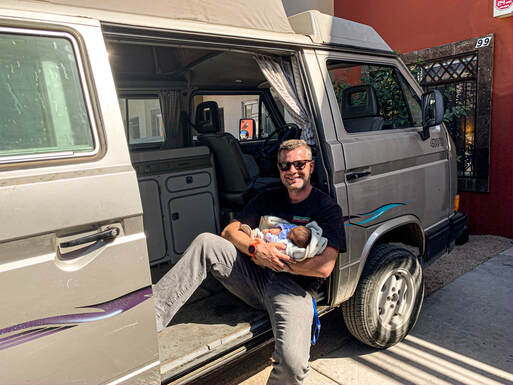 In January 2020 I heard about a 1991 Volkswagen Syncro Westfalia that was brought into Geraldo VW's in La Paz, Mexico by a couple of Canadians who had pulled it out of the nearby town of La Ventana. I found out who they were, and reached out to the buyer. He told me that the Van was owned by an old friend of his who had passed away a couple years before and the Van had been sitting in a lot adjacent to Geraldos, baking in the Baja sun. The buyer told me that he had flown down from Canada with a friend with the intention of driving it back to British Columbia but had found that it was in worse condition then he expected. It needed all new CV's, front and rear, had a spark plug that had broken in the cylinder head, terrible tires and wheels, and was filthy dirty, to name but a few. After a few days of back and forth, I agreed to buy it from him and take on the restoration. The following couple of months, from January to the end of March 2020 I worked with Geraldo VW's to overhaul some of the major components of the Van. After my last van, Penny, which became a sort of Frankenvan behemoth, I was determined to try to keep this Syncro as original as possible so as to hopefully keep it as reliable as possible. I have no intention of doing a high powered engine conversion, or huge suspension lift, things which caused me a lot of issues on my last build. I chose my upgrades carefully, always asking myself, will this make the Syncro more or less reliable in the long run. Below is the list of upgrades I have done to the Van so far, with links for the curious. I will try to continue to update this as I continue to work on it over time.